Achievements are rewards for various milestones. Many are long-term goals that are unlocked naturally through gameplay, and a few come with item rewards. The player's progress toward each goal can be viewed under the Achievements tab in the Inventory.

Important Note: Progress is primarily linked to individual characters (taming, growing crops, etc), but some can be linked to worlds where someone has already achieved them (picking flowers, finding a fallen star, etc). This means:

Below is the in-game list of obtainable achievements. Please note that you may not be see some of the achievements in your list until you have unlocked them.

Many correspond to and sync with their Steam versions, but some may be missing from Steam or have slightly different descriptions.

Certain achievements are not listed anywhere in game, but still give rewards to the player for completing certain criteria.

In addition to achievement goals, the player can keep track of their progress in other areas. At the end of every day, a "Daily Stats" screen will show, listing number tallies of what the player has accomplished that day. The categories are: 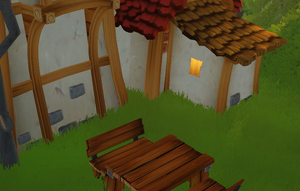 Stats sheet behind the Mayor's house

The player can check these stats in game by looking at the paper pinned to the back of Mayor Wilson's house at the start of the game, then behind the Town Hall once it is built. 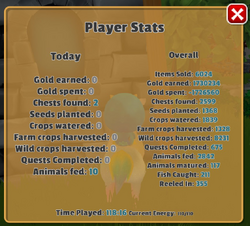 The pop up lists "Player Stats", which include the above stats for the current day, as well as overall totals for the lifetime of the current character. Additional totals in the 'overall' list are:

There are no particular rewards for advancing these tallies beyond what's already listed in the above achievements table. The stats are mainly for those players who like to keep track of what they've accomplished over time.