Florens: Dock near
Frank and Charlie
Kozita: Dock next to Herb

None
Captain Conrad is the dockmaster for the Town of Florens.

Captain Conrad organizes all shipping orders for goods and services from the mainland to the Island of Florens.

They are also in charge of the ferry that takes the player to Halloween Island, Winter Island, and Combat Island.

The player never actually sees the various large ships Conrad asks for help repairing via quests, and Conrad never moves from their post. The only visible boat is the small rowboat at the end of the dock.

There is a tiny version of Captain Conrad sitting in a boat at the bottom of the Fish Drying Rack. 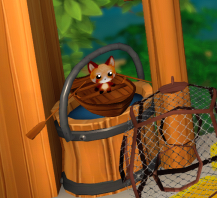