Dev's Island is a Decorative Island that can be found at far south-eastern part of the world map. The island is densely packed with unique plants, a chest, NPCs, and props. The island is an easter egg, and currently has no purpose other than as a nod to the developers.

The island and its residents are unmarked on the in-game map, so it is not often visited. Even if you know where it is, reaching the area might seem impossible for players. However there are two notable ways to reach the island:

The player must first meet these requirements:

Alternatively, the player can place wooden platforms and/or wooden ramps to create bridges from surrounding islands to reach the area.

The region is isolated but is home to 3 NPCs, named for the developers: 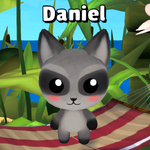 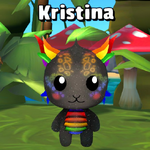 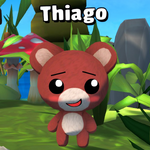 The characters have yet to play any role in the game so far, other than having unique reaction dialogues to the Earthquake event.

You can buy a Guitar from Thiago for

The Othala Rune (pronounced "OH-thall-LA") found on the south-eastern part of the region, along a pathway holds rumors of "something important", as stated by Developer Kristina.

While there are no in-game clues that explain the importance of the rune, there was a reference on Discord in the early stages of the game to the structure being intended as a teleporter to reach the shop/default home location, or as part of a network of teleporters across the islands. The plan may have been dropped for technical reasons, or in favor of prioritizing other aspects of the game.

The rune itself has its own meaning:

In June 2020, some users raised concerns over the symbol's association with hate groups. The developers clarified that they were not aware that it was misappropriated by hate groups and that their knowledge of the symbol's meaning was related to the definition above.

Dev's Island is one of the few places the player can find colored Dandelions.