Next to cave entrances in the Mountain Region on Kozita

No
Has crystal eyes when a Dragon Egg spawns
Dragon Rock Statue refers to both the rock formation outside of the dragon caves in the Mountain Region of Kozita, as well as the decorative furniture items sold by Mina.

There are 6 dragon rock formations in total. 5 are directly outside of caves, and 1 just south of one. For locations, see Caves (Kozita) or Kozita Detailed Map.

The dragon heads outside the caves are more than just scenery. Normally the formations have no eyes. But when a Dragon Egg spawns in a nest somewhere on the island, all of the dragon rock formations will have clear crystal eyes for that day. 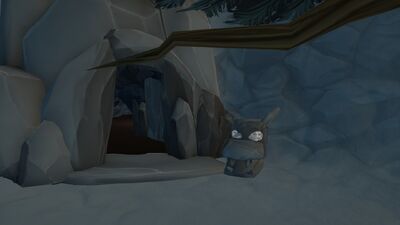 Dragon Rock Statue on a day a Dragon Egg has spawned

The crystal eyes will remain all day long even after an egg has been collected, but only as long as the player remains on Kozita. After leaving to Florens and returning, the eyes will no longer be there unless there was another egg that was previously not found (it is possible for more than 1 to spawn in a single day).

After the player begins collecting Dragon Statues, they can be traded to Mina for a large decorative replica of the rock formation. 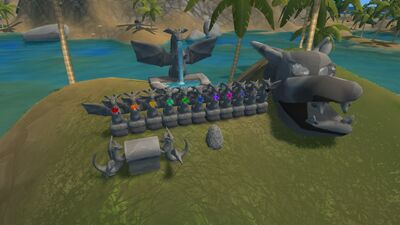