Garden Paws Wiki
Register
Don't have an account?
Sign In
Advertisement
in: Items, Bugs and Issues, Spoilers,
and 4 more

Dragon Statues are special treasure hunt items that can be found hidden in various locations around Kozita, primarily around Rock Island and the Mountain Region.

They are not placeable items, but a form of currency that can be traded for dragon-themed decorations.

Dragon Statues will not initially spawn anywhere on Kozita. The player must first:

After talking to Mina about them, 20 statues will spawn in random locations. The locations will not change until Spring 1 of the following year, when the set of 20 refreshes in new spots.

Choosing the dialogue option "Ask about statues" will have Mina tell the player how many of the 20 statues are left to find for that year.

Dragon Statues emit a bell/jingling sound when the camera is nearby, similar to Loot Chests. This is important if you are hunting statues, because some can spawn inside rocks or trees.

Only 20 Dragon Statues spawn on Kozita per in-game year, but there are many possible spawn points. Those that do spawn are available to find all year long, in any weather.

Map of known statue locations (may be incomplete): 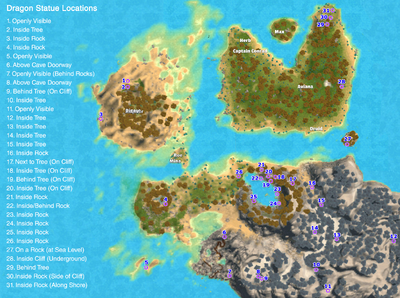 If you find a statue not on this map, let us know in the Garden Paws Discord!

Dragon Statues can be traded to Mina for various dragon-related items, or Jasper for the Gem Pillar or Resource Bag: