The Dungeon is where players can engage in combat with various enemy creatures and collect special loot found nowhere else in the game. 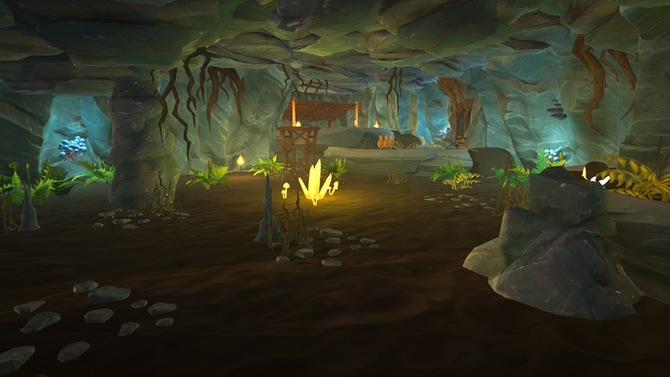 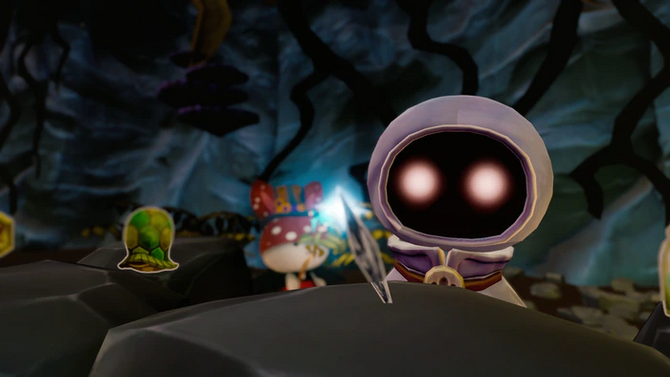 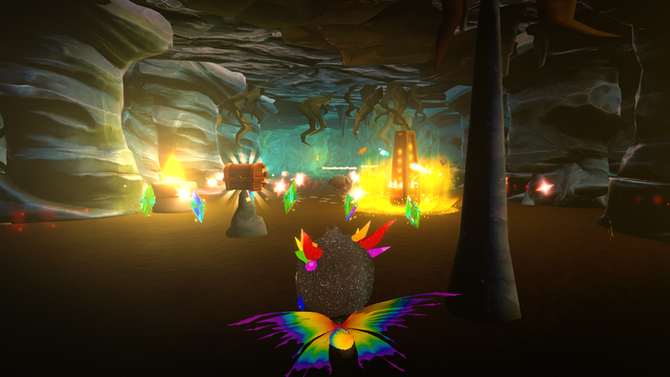 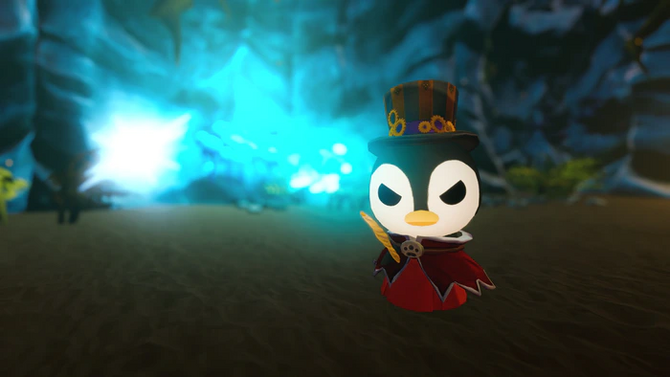 Master combat with your wand and tame enemies as you explore!

In order to gain access to the Dungeon, the player must first speak to Hash and complete a series of instructive quests beginning with "Guildmaster".

Entering the cave doorway across from Hash can lead to different places depending on what the player last did inside:

The clock does not progress in the Dungeon itself, but entering will "cost" exactly 3 hours of daytime. The time skip goes into effect once you enter, and the 3 hours will be lost no matter how long is actually spent in the dungeon. So if you enter at 14:00 for example, it will be 17:00 both inside the dungeon as well as when you exit, even if you spend an entire IRL day inside.

There is a special storage chest next to Hash. It shares inventory with similar chests on all Dungeon Shop levels, and can be used to offload extra inventory or loot items to free up space.

Level numbers begin at 1 and can go well past 100, cycling through elemental themes every 10 levels: Rock, Ice, Desert, Forest, and Lava

Dungeon level layouts are procedurally generated, so it is possible to find yourself stuck in a level with no access to a door. Exiting and reentering will generate a new layout.

Leaving the Dungeon by doorway automatically saves where you left off, with 2 important exceptions:

There is a secret "Hard Mode" players can turn on to provide more of a challenge.

How to activate: Before you enter into any level from the entrance chamber lobby, there is a set of blue mushrooms on the wall. Hit all the mushroom in order from the smallest to the biggest. You will see red glowing eyes to let you know hard mode has been activated.

This mode decreases your maximum health from 250 to 100 and makes mobs more aggressive - but you get double loot from every kill.

Wands deal less damage the further you are from an enemy. So while attacking from farther away is possible, it will take longer to complete levels.

Dungeon combat can be difficult to get the hang of, especially for players with little to no experience with ranged fighting. But here are some quick beginner tips to hopefully make it a little easier:

For an in depth overview, see Combat FAQs.

Every combat level features a few groups of elemental mobs that match the level's theme, and one Ritual. There are only 2 types of mobs at the moment, a basic one with physical and jump attacks and one with magical ranged attacks.

The player will encounter enemies according to the theme of that Dungeon level.

All mobs in a level are linked to Mob Spawners, which look like stone disks on the ground. There are about 3-4 in every level. Each Spawner will send out a limited number of mobs before it is destroyed, so don't worry about unlimited enemies coming after you. Destroying a Mob Spawner spawns a loot chest in its place.

Rituals are the tall glowing stone monoliths with runes etched in the side. Destroying them is the main goal for each level.

When attacked, Rituals shoot out concentric circles of fireballs. The frequency of the fireballs is directly related to the speed and angle of your attacks, so it is possible to time them for easier maneuvering. They also don't move very fast, and are easy to jump over or dodge from a moderate distance.

Destroying a Ritual spawns a large loot chest and unlocks progress to the next level.

Every 10 elemental levels is followed by a boss level. The boss mob is a large-sized variation of the mage enemy of the same elemental type.

Bosses have their own special attacks, and spawn waves of smaller mobs to attack. There are different strategies for defeating bosses, depending on play style.

Certain items are unique to the Dungeon, and cannot be obtained anywhere else in the game. These items can drop from enemies, be found in Dungeon loot chests, Dungeon Boxes, or Dungeon Bags, or purchased from the Dungeon Shop.

You can visit Hash outside the Dungeon to exchange Dungeon Shards for Coins.

Dungeon Relics are buff items that the player can find while looting chests or enemy drops. They must be in the hotbar to use, and provide bonuses only while the player is inside the Dungeon. They disappear from the inventory once outside the Dungeon.

Life in a Bottle

Shards in a Bottle

Speed in a Bottle

Once you reach Dungeon levels 11 and 21, you unlock Hash's quests for the Taming Wand and Ice Taming Wands.

A mob hit by a Taming Wand will disappear from the world and turn into an item in the player's inventory. It can then be placed in the pet slot or an Animal Display.

Gem Shards can be combined in a Jewellery Workbench to create Gems. Glass, Ice, and Fire Shards are used in other crafting recipes.

The following information was provided by the devs:

Each dungeon floor will get better loot drops on the later floors, (floor 39 will drop more silver than floor 31). Almost all floors also have a chance to drop dungeon boxes, coin bags, etc.

There are still many players who experience full game crashes while playing in the Dungeon, often while moving from one level to another. In order to minimize the risk of this happening, it is recommended to either