1x Hard Hat
1x Construction Vest
Frank is the general contractor and carpenter for the Town of Florens.

One of the first characters the player meets when starting a new world, Frank's introductory quest unlocks use of the player's shop.

For the rest of the game Frank remains on the porch of a house to the left of the town gate, on a small cliff next to the Town Mine (between Charlie and Captain Conrad). For Frank's exact location, see the Detailed Map.

Over time, Frank offers a wide variety of Town Upgrades to the residents of Florens, as well as improvement and expansions to the player's home and farm. These can be accessed at the Upgrade Table nearby. 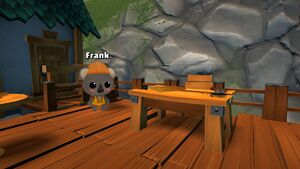 Frank next to the Upgrade Table

The following items can be purchased directly from Frank. These resources are available to the player to buy from start of game.

Most NPCs refer to Frank as "they/them", but Poppy is one of the only ones to use "he/him", in "An Awkward Thanks".