The Maze is a large hedge structure on Halloween Island. It is the location of Kojo's Maze Minigame.

When the player first meets Kojo, they are given the quest Complete the Maze. The goal is to find a way through the hedges to the center, where a Pumpkin Trophy is hidden.

There is only one real path through the Maze from entrance to exit. What makes it confusing is the inconsistent lengths and width of the hedge rooms and corridors.

It is recommended to try and solve the Maze on your own, but below is a rough approximation of the Maze layout, for those who have trouble navigating. Chests and some major obstacles (such as trees or large Red Mushrooms) have also been marked. 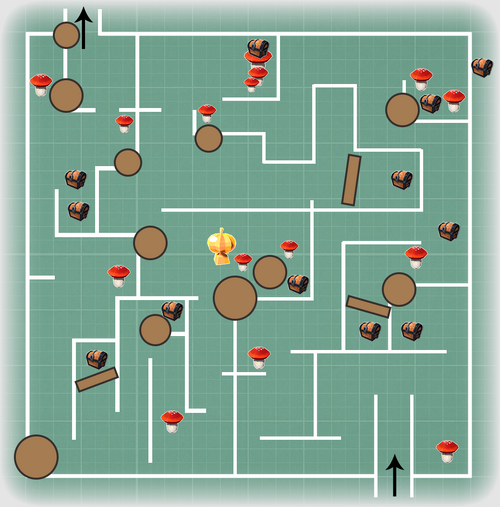 The year after the player completes the Maze, Kojo offers a followup Maze quest, Complete the Maze 2. There is another Pumpkin Trophy, and the layout is the same as the previous year.

Subsequent years have no Pumpkin Trophies at the center, but all Chests respawn regardless of whether or not there is a quest to enter the maze. Most contain one or more PumpCoins.

Community content is available under CC-BY-SA unless otherwise noted.