Edit
watch 01:36
We're Getting Mutants in the MCU - The Loop
Do you like this video?
Play Sound

Play until Spring 15, Year 1
Kieran is a surfer who runs the campsite at the eastern end of the Waterfall Region.

Starting in Spring Year 1, Kieran offers the repeating quest Weeds for Rocks. It must be completed before Summer.

There is a minor visual glitch with Kieran where his shorts are invisible from certain angles. 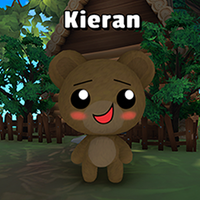