Loot Chests are object-versions of Large Chests that appear scattered around the islands.

They can only be opened, and disappear shortly after the items inside have been taken.

Loot Chests contain a variety of items, including plants, clothing, or skins. In this way they can provide an alternative (though unreliable) means of obtaining certain more common items.

The chests have 2-3 slots, and can contain either different items in each slot, or one item stack split between the slots (e.g. 1 Pink Leaf in one, 3 Pink Leaf in the other).

As of update 1.4.5, Loot Chests respawn more rarely, and reloading from the menu or returning from another island does not refresh them. (Previously, chests always respawned on initial loading of the world.)

A special sound can be heard when the camera (not player) is near a chest[2]. This can help locate chests for new players who are not familiar with the world yet. Early game, some chests in caves can be heard, but will not be accessible until after the Miner's Camp is purchased and the player pays to clear the entrance.

Below is a map of chest locations. Click the image to enlarge it: 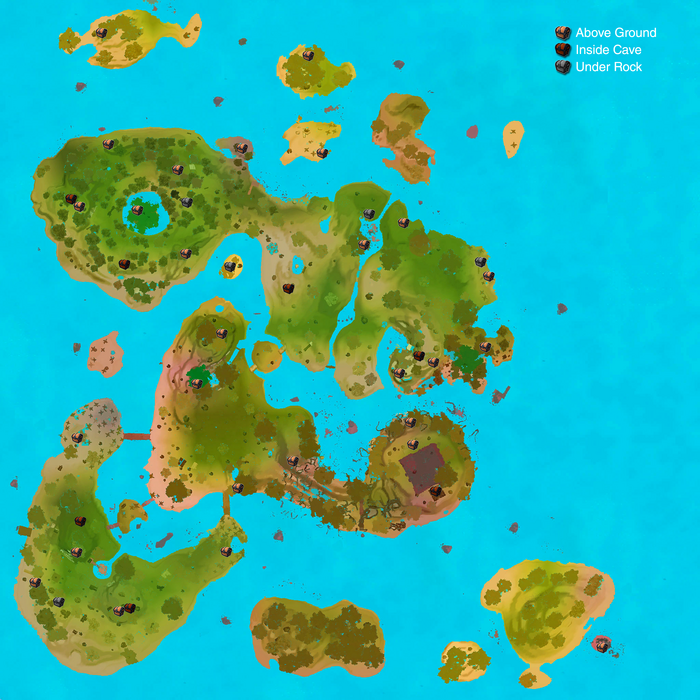 To see the map at its original size, click the small "see full size image" link that appears on the top left of the image pop-up.

For locations of chests in relation to other objects, see Detailed Map

Chests contain randomized loot. Sometimes you will get lucky and find something rare, but more often it will be a common item.

Below are some of the items that show up much more frequently early game:

It is also possible to find resources in Loot Chests, such as wood, glass, or poop. They usually appear in multiples of 10.

At the beginning of Year 4, the number, quality, and rarity of items found in Loot Chests increases dramatically.

From then on, the player can find things like Stardust, Stardust Skins, Copper/Silver/Gold Bars, Habitats, Coin Bags, Treasure Map Fragments, rare furniture, and other special items.