Some animals can be ridden by the player. Depending on the animal, movement speed and jump height is either reduced or increased.

How To Use a Mount[]

The table below outlines existing mounts, as well as their requirements and feed requirements.

With the exception of the piglet, baby forms of animals cannot be mounted.

Coloured animals obtained through breeding have the same stats as the default ones.

Legendary animals can be obtained more than once, however the chance for them to spawn must be unlocked by completing certain achievements.

Taming them is instantaneous, but they still need to be led to a habitat to complete the taming process. They require the same habitats as their non-legendary counterparts (Bunny Habitat, Chicken Coop, Dung Beetle Habitat, or Stable).

Once requirements for a legendary mount are met, there will be a small chance every morning[1] for that mount to spawn somewhere in the world typically on the Outer Islands.

The map below shows the most frequently reported spawn locations: 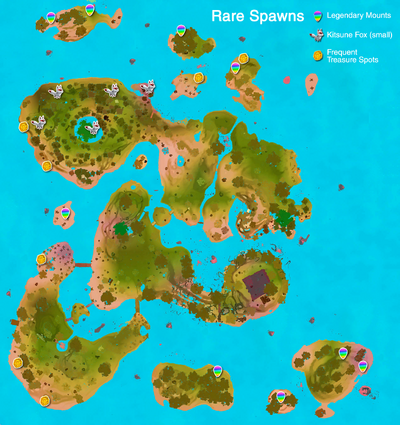 Rare Mounts can only be obtained once per save file.

The following animals can only be obtained once the player makes it to Kozita in year 4: