1x Fishing Pole
Robert is a fisherman who lives with his wife, Flo.

Robert and Flo have a house on the border of the Duck Pond Region and Forest Region, along the same stretch of coastline as Thorne.

Robert considers himself an old bear who likes to fish as a hobby in his later years. He has a history with McCoy (unspecified other than knowing each other for years), and goes out of his way to encourage Flo's many hobbies, which makes up a large portion of the quests he gives the player.

Robert has a yearly quest in Winter where he asks the player to bring him a Pink Penguin. 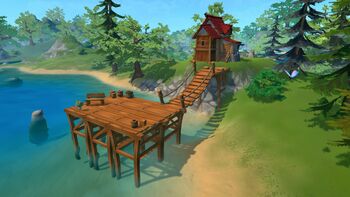