Rock Island is the landmass located west of the Main Island of Kozita. 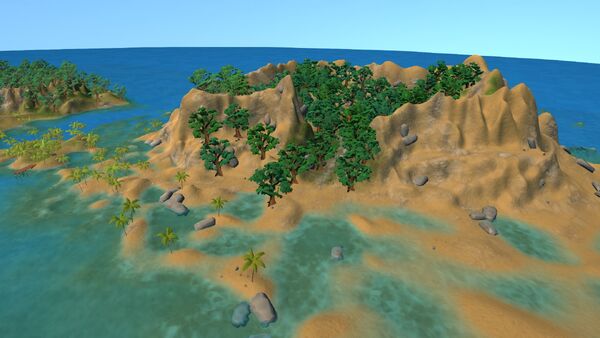 Rock Island was originally a busy mining camp before the corruption took over and surrounded the main island with a ring of thorns. With access blocked, the miners could not get supplies in or out, and the mines fell into disrepair.

When first visiting Kozita, access to Rock Island is blocked off until the thorns can be removed. After completing the quest "Thorn Free" for the Druid, it can be reached via glider or raft. 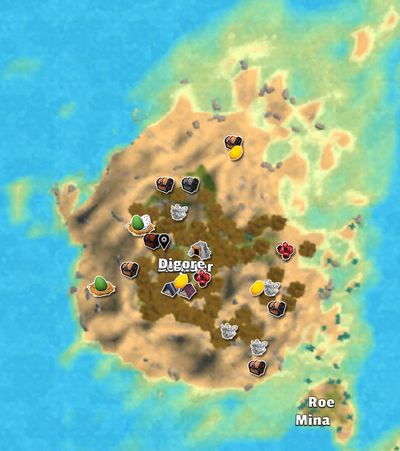 Kozita's main mine is at the center of Rock Island. Initially it is blocked by stone and inaccessible because of the broken scaffolding, but through completing quests the player can help fix the walkways and reopen the cave. 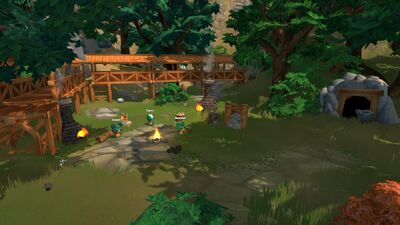 Mining camp (mine at the top left) and fast travel minecart

A fast travel option, like the minecarts in Florens, can be unlocked to quickly move between Rock Island and the center of the Mountain Region.

They will be inaccessible until completing both "Broken Mine" quest crates.

Seven Loot Chests can be found around the island:

There are 2 Nests on Rock Island.

3 miners live in the middle of Rock Island, while Roe and Mina can be found on the tiny island just southeast of the main landmass.

Being a mining location, Rock Island is rich in resources. In addition to stone, marble, geodes, and crystal geodes, there are new crystal-shaped copper, silver, and gold ore formations out in the open that can be mined to directly receive the ores, instead of needing to put geodes through a processor or anvil.

There are 3 fruit trees and plenty of regular trees and bushes available to harvest wood, and an abundance of Dragon Fruit plants. A selection of the more basic plants and flowers can also be found in random spots.

After completing "Statues for Jasper", there will be a Stone Display Stand next to Jasper where Dragon Statues can be traded for resources such as Geode Resource Bags.