The Screenshot Mode, also called Drone Camera Mode, is a way for the player to achieve cinematic-quality screenshots.

Activating Screenshot Mode hides the UI and disconnects the camera view from behind the character, allowing you to move around the world like a "drone".

To move the camera, use the WASD keys and mouse (or the equivalent gamepad controls) as you normally would. Shift speeds up movement. Holding Shift+W/S along with A or D will move even faster, but on an angle. It can take some getting used to, but it will allow you to zip around a bit more quickly.
If the screen looks blurry at some angles, you can adjust that in the settings below. 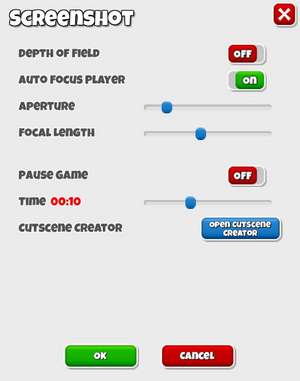 To change settings for the Drone Camera, press F9.

When turned on, makes the screen sharp when facing the player character, and blurry when facing away.

When turned off, there is another button labeled "Set Focus". This sets the center focal point to wherever the camera is at that moment. It does not have to be near the player character.

If Depth of Field is turned off, this setting has no effect.

When Depth of Field is turned on, this slider affects how large an area around your focal point (character or otherwise) remains in focus at a time. The higher the number, the narrower the distance. At 0.00, nothing is in focus. At around 2.00, only things horizontally in line with the player remain in focus. 30.00 is the maximum distance.

This setting is best used together with Focal Length.

This setting is best used together with Aperture.

In a single player world, this setting pauses or unpauses time without leaving screenshot mode. It has no effect in multiplayer.

This slider affects the position of the sun in the sky based on time of day, from 06:10 to 23:18. It does not clear up the weather or remove clouds, so you will still need a sunny day for best results.

Manipulating the sun allows for dynamic-looking shots no matter what time of day it is. Found a perfect photo opportunity, but it's night and the lighting sucks? Change it to the middle of the day.

Note: This does not actually change the time in game. It only shows what the lighting will look like at that time.

This feature is not currently implemented.

To exit Screenshot Mode, press ESC. This will cancel any F9 lighting adjustments or changes you made, and snap the camera back to your character where you left off in regular gameplay.

Retrieved from "https://gardenpaws.fandom.com/wiki/Screenshot_Mode?oldid=24943"
Community content is available under CC-BY-SA unless otherwise noted.