Storage is important in the world of Garden Paws, where collecting items is an essential part of gameplay. Without a place to put all of the items the you gather, you would quickly run out of inventory space.

Thankfully there are many storage items available over the course of the game. 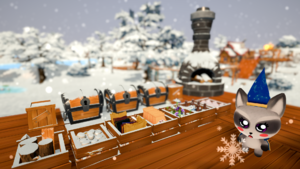 Storage items in the snow

Most storage items in the game are craftable, though some crafting recipes must be unlocked through quests or Blueprints. Other storage items can be purchased from shopkeepers or received as quest or minigame rewards.

General storage items are recognizable storage objects that are capable of storing any kind of item in the game.

These storage containers display in-game icons of the items inside.

Limited storage items are containers with limits for what type of items can be placed inside.

Decorative storage covers containers that either blend in as decorations, are not immediately obvious as containers, or seem like they might have limited storage based on their names and how they look, but they can in fact hold any items in the game:

There is a useful feature in the game called "Auto Deposit". If you are near a storage container that has items inside, pressing "F" will dump any of those same items from your inventory right into the chest, without having to open the chest.

This makes sorting items and decluttering your inventory much faster.

Auto deposit will only work if at least 1 of that same item is already in that storage container.

The problem: Sometimes if two of the same type of storage containers occupy the same space (touching or overlapping), an overwrite can happen where the contents of box X get copied into box Y, replacing whatever was in box Y.

The replacement is permanent, so any items lost will not be retrievable unless you restore a previous save file from before the overwrite happened. But the restore option is only possible if you have not played past the 10-day save backup window.

Why this happens: Each container type has an ID dependent on the container itself, not its contents. So if 2 or more are sharing the same space, the game gets confused about which one is actually in that spot, or thinks both are the same item, hence the overwriting.

Currently the only way to prevent this is to make sure you don't have multiples of the same storage item (2 gem crates, 2 sheds, etc) too close or overlapping.

Retrieved from "https://gardenpaws.fandom.com/wiki/Storage?oldid=28713"
Community content is available under CC-BY-SA unless otherwise noted.