Twitch Integration is a feature that lets Twitch Streamers engage with viewers in the game.

In addition to on-screen hype (see below), anyone who types a message in your stream chat in the previous 6 minutes has a chance to show up with their username over a random customer in your shop, or as a patron inside the Inn. Those viewers can then type certain commands into chat to affect "their" character while on screen.

1. Make sure the Stream is live.
2. Exit to the Paws Menu.
3. Click the "Twitch Integration" button.
4. Enter in your Twitch Channel name, and click "Connect".
5. Select your preferred settings:
6. Close the menu and continue playing. 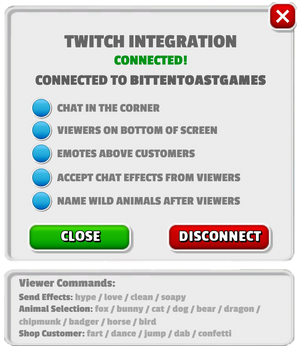 Integration settings can be adjusted or disconnected at any time.

If "Viewers on Bottom of Screen" is enabled, viewers who have typed in chat within the past 10 minutes will appear as 3D characters at the bottom of the screen, which will walk back and forth, sit, and do other actions at random.

The following keywords can be used by viewers to customize the avatar bearing their username:

If "Accept Chat Effects" is enabled, viewers can type keywords to make the streamer's in-game character perform certain actions while they are playing.

They are only visual effects, and do not interfere with the streamer's playing.

Whenever the streamer opens their shop to sell items or enters the Inn, viewers who have sent a message in Twitch Chat in the past 6 minutes will have their screen names appear above random customers or Inn patrons.

Viewers can change their character's animal base and skin by typing the same keywords as for their 3D avatars. However the keywords will also change their avatars at the bottom of the screen (which is where the "save/load" commands can come in useful).

If "Emotes Above Customers" is enabled, viewers can also type the following keywords to make their in-game character do certain actions while on screen: "dance / jump / fart / dab / confetti". These commands will not effect the avatars at the bottom of the screen, only the in-game ones.